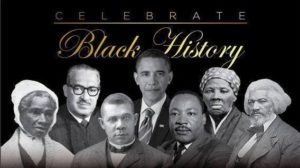 As we celebrate Black History Month remember –Inventors, entrepreneurs, financial wizards, and those who had a great impact on social changes and social justice. Their dreams can be achieved by those of you who make the bold decision to apply your knowledge, your energy and your talent to humanitarian goals. Think of how those we honor today gave to make a difference for others.
If it is encouraging, let him encourage;
if it is contributing to the needs of others,
let him give generously; if it is leadership,
let him govern diligently; if it is showing mercy, let him do it cheerfully. Romans 12:8 NIV
#BlackHistoryMonth #CelebrateGiftsofBlackpeople

As we celebrate great African American men and women this month I want to recognize today and thank those whose foundation we walk upon. Those who pressed forward and did not allow challenges and pain to stop them.

Victory of Spirit- Black Quotations- Persevere- Don’t Quit
“You never know which key unlocks the safe” .Bryant Gumbel, former Morning News Host #persevere
Success is achieved by those willing to persevere beyond the point where the majority stop and turn back. Today is your day.
God has given you talents, gifts and His Word. Take another step closer to your goal. Hold fast to the hope, the Word, to “doing” your dream if God put it there. (Hebrews 10:35-39)

I thank God for men and women who have grabbed the baton to make the world a better place and are stepping forward to make the dream work and  to pursue their individual dreams. Take for instance husband , father, mentor , leader , instructor and businessman  Jessie A. Cole , Jr.

Jesse A. Cole, Jr.  stepped up to the challenge of  training and working with young males to provide guidance and direction.  Cole’s book Walk Like A King: The Young Man’s Guide To Conquering The World was written specifically with the young man in mind  to answer questions about: Integrity, Self-Control, Goal Setting, Love, Personal Hygiene, Spirituality, Community Service and Education. The book addresses real life issues with practicality and offers clearly outlined solutions from a male perspective. The imbedded workbook gives the reader an immediate opportunity to implement what they’ve learned and they can track their development with ease.

Respected as “a voice for today’s generation”, Jesse has proven that he is a thought leader and a source of substance. He has published several books on personal development and executive produced the Maximize Your Greatness dvd project. Jesse uses his influence to help teenagers live the type of life that is far above what they could ever imagine. His message helps youth to transform their attitude, boost their self-esteem, overcome peer pressure and enhance their leadership ability. For over a decade, Jesse has worked as a youth counselor, basketball coach, and certified deputy instructor. His motto is K.I.N.G: Keep Investing In The Next Generation.

Jessie was inspired to write the book because of the lack of male presence in the lives of the young men I work with. He found that young boys and men  are so hungry for direction and it seemed as if they were receiving little guidance, Therefore Jessie decided to step in and provide hope and fill the void.

When Jessie wrote the book “Walk Like A King” Dr. Martin Luther King’s birthday was approaching, Black History month was a the next month .Jessie thought about the men who had deposited into his life. Believing that black young men and men of color need to feel like they belong to something bigger than themselves, the concept of “walk like a king” rose up in his spirit. A king represents not only royalty, but power. So in essence, Jessie tells  young men that they have the ability to walk in power.

Jessie shared that he has had the privilege of seeing his father and other great men walk out there manhood before him. He stated, “I’ve seen them at their highest points as well as their lowest. And the way they handles the pressure of manhood was kingly. Because of their examples, I am able to do the same and deposit back into the next generation of young kings”.

I encourage you to walk like the King or Queen God designed you to be a blessings as others.

“What you want to become depends on your willingness to become it.”